Researchers Team Up to Provide New Hope for Childhood Hunger 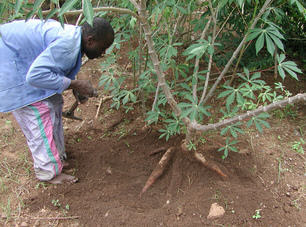 CASSAVAVIET to follow up Newswise Science News, 27-Jul-2009: A St. Louis-based team of plant and physician-scientists with a vision of eradicating malnutrition throughout the developing world today announced the formation of the Global Harvest Alliance (GHA), a humanitarian effort involving St. Louis Children’s Hospital, The Donald Danforth Plant Science Center and Washington University School of Medicine. Though they share a commonality of purpose, each institution brings unique strengths and world-class leadership within their respective fields to bear on this global challenge.(Picture from Donald Danforth Plant Science Center: Cassava being harvested.


The focus of the newly formed Alliance will be to create low-cost, nutritionally complete foods to prevent and treat all forms of under-nutrition. These foods will incorporate crops that are protein and micronutrient rich, disease-and pest-resistant, and that can be disseminated through smallholder farmers.

Heading the GHA team is Mark Manary, M.D., a leader in the field of childhood malnutrition who is the Helene B. Roberson Professor of Pediatrics at Washington University School of Medicine; and member, Donald Danforth Plant Science Center. Manary has a successful track record with such innovation; his peanut butter-based ready-to-use therapeutic food (RUTF) for the treatment of severe acute malnutrition has consistently resulted in 90% recovery rates in research and operational projects. The World Health Organization officially declared Manary’s RUTF the most effective method by which malnourished children should be restored to health.

Manary’s work extends beyond RUTF. He explores the basic mechanisms by which malnutrition compromises human health, gaining new scientific insights to improve and refine his approach to combating malnutrition. Understanding that even a successful food-based approach to treating malnutrition will never prevent it, in 2004 he began to collaborate with colleagues at the Danforth Plant Science Center to create a formidable preventive strategy. The intent is to enhance crops so that they can thrive where malnutrition is rampant and provide a complete package of nutrients needed for health. With his RUTF efforts complemented by the Danforth Center’s cassava team, the full vision for the Global Harvest Alliance began to take shape.

“Effective solutions to the crisis of childhood malnutrition must involve interventions spanning a diverse spectrum of disciplines including health care, agriculture and home economics. People in the developing world derive most of their nutrients from plants; plants constitute 90% of the diet of many Africans. Therefore effective prevention strategies must include food crops that provide more complete nutrition,” said Manary.

The Donald Danforth Plant Science Center, a GHA partner, has been a leader in biofortification for more than a decade. The Center is a recipient of funds from the Bill & Melinda Gates Foundation to conduct research as part of BioCassava Plus, an international initiative seeking to make cassava a more nutritionally rich and balanced staple plant crop. The project has demonstrated unprecedented success in enhancing cassava to contain more protein, vitamins and minerals, more robust plant virus resistance, delayed post-harvest deterioration and reduced cyanide content. Farmer-preferred varieties are being collected and analyzed, and Dr. Manary is building a network of in-country nutritionists to add to the team of Danforth Center scientists already in place.

Led by GHA scientists, teams will field-test improved cassava varieties in Kenya and Nigeria during the next five years. Through the efforts of the Danforth Center and its collaborators, the improved varieties could potentially be widely available in Africa within 10 years, improving survival-rates and quality of life for millions of children and families that would otherwise suffer malnutrition. The GHA will also explore improvements in additional staple crops, including sorghum and a legume such as cowpea or peanuts.

“Mark Manary is an internationally recognized leader in child nutrition research. He has pioneered several approaches to enhancing the nutrition of the world’s most severely malnourished children. The new Global Harvest Alliance promises to accelerate the advances which Dr. Manary champions via the combined commitments of Washington University School of Medicine, St. Louis Children’s Hospital and Donald Danforth Plant Sciences Center,” said Alan L. Schwartz, M.D., Ph.D., the Harriet B. Spoehrer Professor and chairman of Pediatrics at Washington University School of Medicine.

"St. Louis Children's Hospital has a vibrant outreach mission supported by our many donors to expand our vision of ‘better health and better health care’ to the children of our community. This alliance gives new and important meaning to our capacity to extend ourselves beyond the region to a global community," said Lee Fetter, president, St. Louis Children’s Hospital.

The Global Harvest Alliance has developed several goals that will shape its work.

Short Term Goals: 3-5 years
• Develop an effective supplemental feeding regimen for moderate malnutrition.
• Develop a more cost-effective therapeutic feeding regimen for home-based therapy for severe childhood malnutrition.
• Develop effective strategies to treat severe malnutrition in young children with AIDS in sub-Saharan Africa.
• Become a premier education and resource site for students and trainees at all levels in international pediatric nutrition and use of plant science to enhance human health.
• Raise awareness in public and scientific circles about the consequences of childhood malnutrition and how to alleviate it.

Photos courtesy of the Global Harvest Alliance can be found at www.flickr.com/photos/danforthcenter/sets

About the Global Harvest Alliance Partners

Founded in 1998, the Donald Danforth Plant Science Center is a not-for-profit research institute with a mission to improve the human condition through plant science. Research at the Danforth Center will feed the hungry and improve human health, preserve and renew the environment, and enhance the St. Louis region and Missouri as a world center for plant science. Please visit www.danforthcenter.org for additional information.