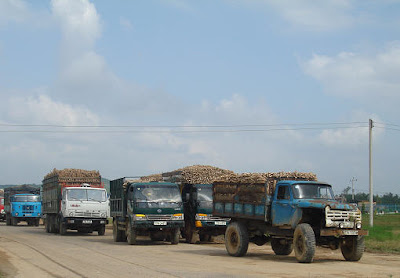 The Ho Chi Minh City-based company, which also offers services such as lodging, storage and warehousing, said in a statement on its website its pretax profit rose 19 percent on higher-than-expected sales of cassava and Nokia mobile phones.

This means it has already achieved 76 percent of its full-year profit target of at least VND100 billion, said the statement, released on July 3 after the market closed.

The company was able to maintain high sales of Nokia mobile phones and increase sales of other information technology products, such as laptops by Hewlett-Packard Co. and Lenovo Group Ltd., the statement said.

The company recorded shipments of more than 250,000 metric tons of dried cassava slices to China and South Korea in the first six months from January to June, exceeding its target, according to the statement, which did not give comparable figures.

Revenue reached VND3.8 trillion in the period, equal to 69 percent of this year’s forecast of VND5.6 trillion, the statement said. This was a 36 percent rise from first-half revenue of VND2.8 trillion a year earlier.

My cousin recommended this blog and she was totally right keep up the fantastic work!
phones sales

Heya¡­my very first comment on your site. ,I have been reading your blog for a while and thought I would completely pop in and drop a friendly note. . It is great stuff indeed. I also wanted to ask..is there a way to subscribe to your site via email?
mobilephones sales

Hey, nice site you have here! Keep up the excellent work!
phones sales

Great thoughts you got there, believe I may possibly try just some of it throughout my daily life.
mobilephones sales