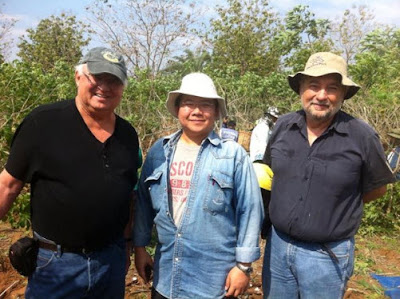 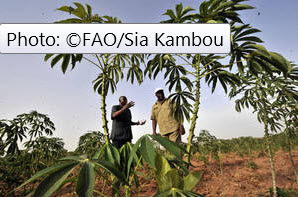 Photo: ©FAO/Sia Kambou Farmers check their cassava crop in Chad
28 May 2013, Rome - Save and Grow, an environmentally-friendly farming model promoted by FAO, can sustainably increase cassava yields by up to 400 percent and help turn this staple from a poor people's food into a 21st Century crop, FAO said today.

In a newly-published field guide detailing Save and Grow's applications to cassava smallholder production, FAO noted that global cassava output has increased by 60 percent since 2000 and is set to accelerate further over the current decade as policymakers recognize its huge potential.

The solution, says FAO, lies in the Save and Grow approach which achieves higher yields with improved soil health rather than with the heavy use of chemical inputs. Save and Grow minimizes soil disturbance caused by conventional tillage such as ploughing, and recommends maintaining a protective cover of vegetation over soil.

Instead of the monocropping normally seen in intensive farming systems, Save and Grow encourages mixed cropping and crops rotation, and predicates integrated pest management, which uses disease-free planting material and pests' natural enemies to keep harmful insects down, instead of chemical pesticides.

The approach has yielded spectacular results in trials organized in Viet Nam, where farmers using the improved technologies and practices boosted cassava yields from 8.5 tonnes to 36 tonnes -- an increase of more than 400 percent.

In the Democratic Republic of Congo, through training in the use of healthy planting materials, mulching and intercropping, farmers attending field schools achieved yield increases of up to 250 percent.

In Colombia, rotating cassava with beans and sorghum restored yields where mineral fertilizer alone had failed.

Cassava is a highly versatile crop grown by smallholders in more than 100 countries. Its roots are rich in carbohydrates while its tender leaves contain up to 25 percent protein, plus iron, calcium and vitamins A and C. Other parts of the plant can be used as animal feed, and livestock raised on cassava have good disease resistance and low mortality rates.

One reason driving increased demand for cassava is the current high level of cereal prices. This makes it an attractive alternative to wheat and maize, particularly as cassava can be processed into a high-quality flour than can partially substitute for wheat flour.

But, together with its importance as a source of food and food security, cassava also has a range of industrial uses that give it huge potential to spur rural industrial development and raise rural incomes.

Cassava is second only to maize as a source of starch and recently-developed varieties produce root starch that will be highly sought after by industries.
Demand for cassava as a feedstock for the manufacture of bioethanol is also growing rapidly.

Another important consideration is that of the major staple crops in Africa, hardy, resilient cassava is expected to be the least affected by advancing climate change.

With Save and Grow developing countries can thus avoid the risks of unsustainable intensification while realizing cassava's potential for producing higher yields, alleviating hunger and rural poverty and contributing to national economic development.

SAVE AND GROW: CASSAVA:
A guide to sustainable production intensification (FAO, 2013)

Save and Grow: Cassava (FAO, 2013) is the first in a series of guides on the practical application of FAO’s ecosystem-based model of agriculture, which aims at improving productivity while conserving natural resources.

The guide shows how “Save and Grow” can help cassava growers avoid the risks of intensification, while realizing the crop’s potential for producing higher yields, alleviating hunger and rural poverty, and contributing to national economic development.

This Policy brief presents a summary of the 140-page guide, which can be purchased from: publications-sales@fao.org.


Cassava in Vietnam: Save and Grow 2Daklak


Cassava in Vietnam: Save and Grow 3Daklak 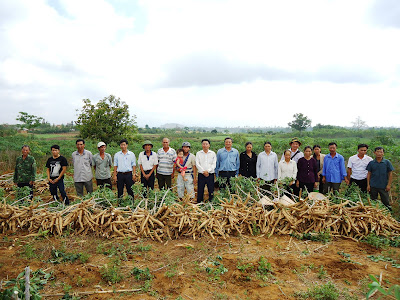