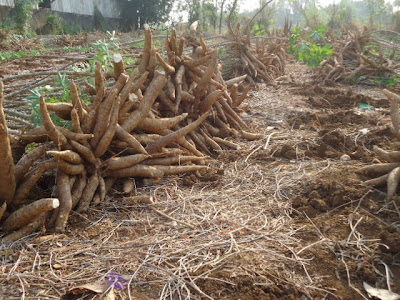 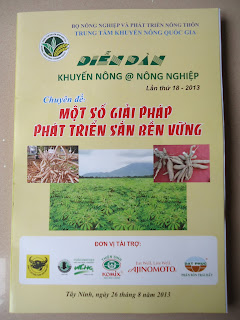 Cassava (Manihot esculenta Crantz) is a crop for food, animal feed, starch processing and currently main raw materials for biofuel processing which has high comparative advantage of many countries in the world and Vietnam. In 2011, there are 100 cassava production countries over the world with total areas of 19.64 million ha, average fresh root yield of 12.83 tons/ha, production of 252.20 million tons (FAO, 2013a)[5]. In Vietnam, cassava is an important food crop which ranks the third in terms of production after rice and maize. In 2011, the national cassava area reached 560,000 ha, average yield of 17.63 ton/ha, production of 9.87 million tons (GSO, 2013a) [32]. Global Cassava Conference held in Belgium in 2008 delivered the message: “Cassava is a gift of the world, opportunity for poor farmers and challenge to scientists”(Claude M. Fauquest 2008)[4]. Instructions on using cassava to produce starch, bio-ethanol, modified starch, animal feed and bio-film are increasingly interested. Vietnam is complimented on spectacular cassava yield which was increased 400% from 8.5 tons/ha in 2000 to 36 tons/ha in 2011 in many smallholders, according to press release “Cassava’s huge potential as 21st century crops ” by FAO in May 2013, (FAO, 2013b) [6]. Cassava dried chips and starch of Vietnam are ones of ten key export products. Vietnam currently has 13 bio-ethanol factories with capacity of 1067.7 million litres of bio-ethanol per year, 66 industrial starch processing factories, more than 2000 manual processing units (Hoang Kim, Le Huy Ham et al. 2013) [12]. Cassava is a choice of many poor smallholders and people who are living in drought, bad fertile soil and a choice of many processing and trading enterprises thanks to its high profits, easy growing, less caring, low cost, easy harvest and process. Cassava producing, processing, consuming, researching and developing are opportunities, prospects of farmers and enterprises of Vietnam as well as many coutries in the world, however, cassava, at the same time, faces many risks and constraints.

Cassava production, consumption in the world and Vietnam

Cassava – a 4F crop of the 21st Century. Cassava is a food crop with 252.20 million tons in production, the 5th rank after maize (883.46 million tons), rice (722.76 million tons), wheat (704.08 million tons) potato (374.38 million tons). 66% of cassava is planted in Africa, 20% in Asia and 14% in Latin America (FAO, 2013) [5]. Cassava is food of more than one billion people in the world, particularly in Africa where cassava is a main food crop. Cassava is a feed crop, flour/ starch processing crop for MSG, instant noodle, candies, sirup, beverage, packages, carton board, pharmaceutical additives, bio-film, soil moisture holders and a main inputs for processing bio-fuel with high comparative advantage (Figure 1 & Figure 2). 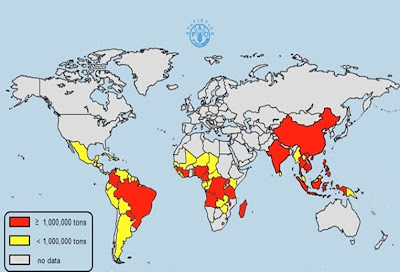 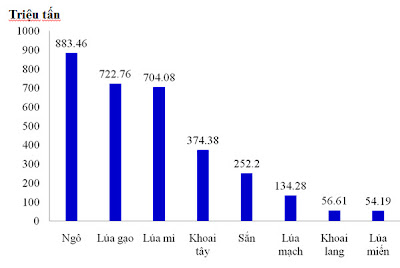 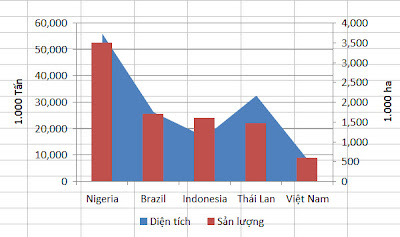 Cassava market projection. According to cassava global market research of FAO and IFPRI, global cassava production will reach 275,10 million tons in 2020 projectively, mainly in developing countries with 274.7 million tons, in developed countries with 0.40 million tons. Cassava consumption in developing countries will be 254.60 million tons while 20.5 million tons in developed countries. Total cassava volume used for food will be projected at 176.3 million tons and animal feed at 53.4 million tons. Annual demand growth on cassava for food and animal feed are 1.98% and 0.95%. Africa will be still a lead continent with production of 168.6 million tons in 2020. Of which, the volume using for food will be 77.2 %, and animal feed will be 4.4 %. Latin America in period of 1993 - 2020, annual consumption growth rate is tentatively at 1,3 %, in comparison with Africa at 2.44 % and Asia at 0.84 – 0.96 %. Cassava continues to maintain its important role in many Asian countries particularly in Southeast Asia where its cassava areas is the third after rice and maize and its total production is the third after rice and sugar cane. Cassava production trends depend on crop competitiveness. Main solutions are to increase cassava yield through adoption of new varieties and advanced technology (Hoàng Kim, 2013a) [11].

Cassava production in Vietnam. Cassava is important income sources of poor farmers thanks to its easy cultivation, low requirement on soils, low investment costs, suitability to bio-ecology and farmer’s livelihoods. Cassava is widely grow from the North to the South of Vietnam with more than half of million ha (Table 2) and production of almost 10 million tons (table 3). 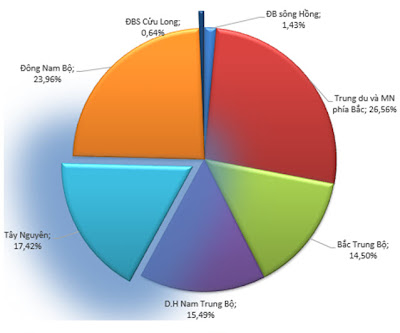 Figure 4 Graph: Areas of cassava by regions of Vienam. 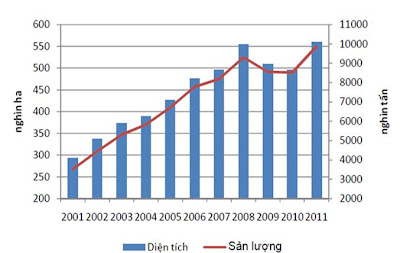 High cassava export turnover in Vietnam. According to custom data, in 2010 total export cassava in 2010 was 1,677 thousand tons cassava and cassava based products. Turnover of 556 million USA. Of which cassava chips accounted for 56,8%, cassava starch: 42,9%. Processed product export is growing and raw product export is decreasing are good signal in the context of many national industries need raw materials and cassava starch price is strongly increasing in the international market. China is the largest market of Vietnam cassava in 2010 accounted for 94,8 % total cassava chip turnover (196.5 million USA) and 90 % of total export of cassava starch (315.4 million USD) (Food crop system of Vietnam, 2011a) [7]. Cassava and cassava based product exports of Vietnam in 2011 was 2.68 million tons (960.2 million USD). In the end of 2012 exports of this product group was 4.23 million tons, increased 57.7% and valued at 1.35 billion USD, increased 40,8 %. China maintains the main market of Vietnam cassava with 3.76 million tons, increased 54.4 % in comparison with previous year and accounted for 88.9 % total export of this product group (custom data, 2013) [31]. 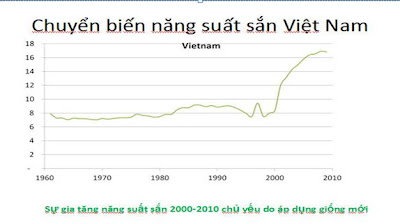 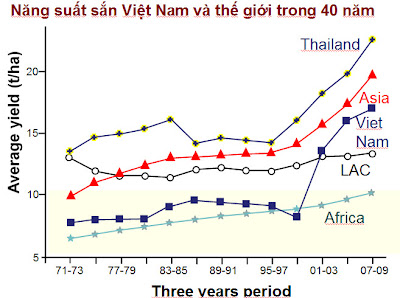 Tây Ninh is the typical province on yield and production increase that bring huse benefits for farmers and enterprises (Table 4). 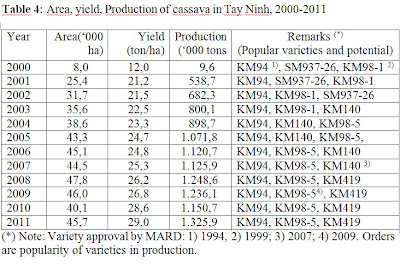 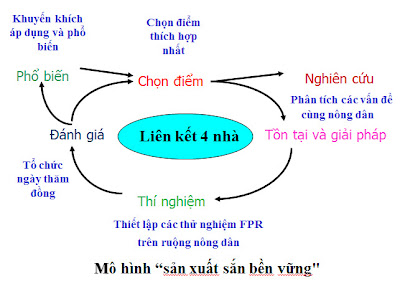 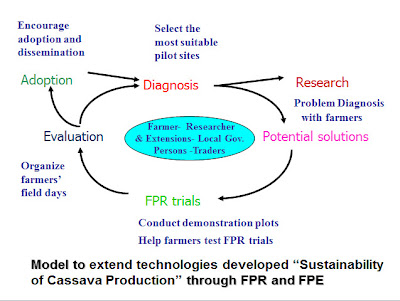 Conclusion
Vietnam cassava was developed sustainably in the first years of the 21st century (2000- 2013) Cassava achievement of Vietnam is huge: Cassava has been transformed from food crop, feed crop into 4F crop (Food, Feed, Flour, Fuel). At national level, cassava has become main export crop and presented in million smallholders thanks to changes in yield and profits. Cassava material from CIAT through selective and breeding process has covered more than 90% of total cassava areas of Vietnam. Learnt lesson of VNCP, 6M,10T and FPR are collaboration experiences that accelerated bringing advanced technology into production for million poor farmers. 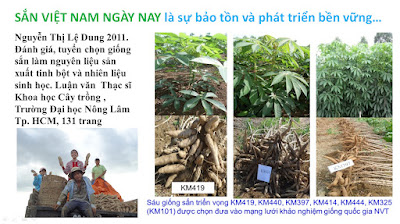 04. Claude M.Fauquest 2008. Cassava: A Gift to the World and a Challenge for Scientists. Paper presented at “Cassava meeting the challenges of the new millennium” hosted by IPBO- Ghent University, Belgium 21-25 July 2008. http://cassavaviet.blogspot.com

09. Kazuo Kawano 2009. Cassava and Vietnam: Now and Then
http://foodcrops.blogspot.com/2012/09/cassava-and-vietnam-now-and-then.html

18. Hoang Kim, Pham Van Bien and R.H.Howeler 2003. Status of cassava in Vietnam: Implications for future research and development. In: A review of cassava in Asia with country case studies on Thailand and Viet Nam; FAO-IFAD-CIAT-CIRAD-IITA-NRI. Proceedings of the validation forum on the Global Cassava Development Strategy held in FAO - Rome, Italy, April 26-28, 2000.Vol/3.Rome, Italy, p103-184. http://www.globalcassavastrategy.net

Cassava in Vietnam: Save and Grow 2Daklak


Cassava in Vietnam: Save and Grow 3Daklak